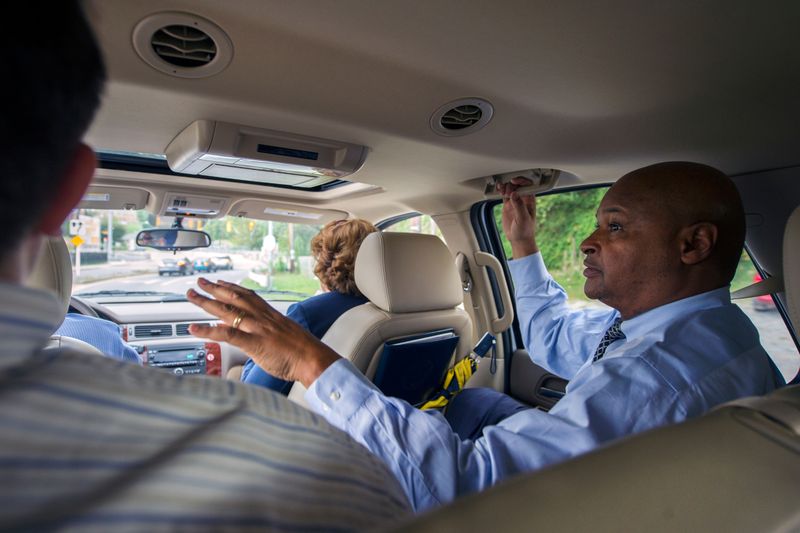 A glistening white Ford Explorer crept through the entrance of one of Charleston’s most notorious low-income housing developments. Riding along in the rental vehicle were five West Virginia University employees and a beloved local pastor, who was guiding this informal tour of Charleston’s West Side neighborhood.

The Explorer passed a boy and a girl—both around ten years old—walking along the road in the middle of a cloudy Monday afternoon.

“I wonder if they should be in school,” said someone in the car.

All else was still among the cluster of nondescript, brick housing units, except for one resident sitting outside.

“This was once the most dangerous place in West Virginia,” said Rev. Matthew J. Watts, senior pastor of Grace Bible Church in Charleston. “No one would come here.”

The Rev. Matthew Watts directs WVU staff on a tour of Charleston’s West Side.

Nothing seems too perilous at this particular moment. For the 20,000-plus people living on the West Side of Charleston, an unjust stigma—carried over from the 1800s—still permeates the neighborhood block after block.

The first development on the West Side saw five farming plantations, with working slaves. It was quite a stark contrast across town in the East End, which had no plantations nor slaves.

“There’s disdain toward the West Side of Charleston,” Watts said. “The stigma carries on to this day. For me, as an African-American, the blood, sweat, and tears of slaves are in this ground. They had a vision of being more than just slaves. The time is here for this ground to be renewed.”

After the abolishment of slavery, the West Side and its residents thrived. During the first half of the twentieth century, African-Americans owned a large percentage of the area’s businesses. West Washington Street developed as a bustling corridor, the education system was in sturdy shape, and the federal government built attractive public housing.

Then came desegregation in the late-1960s.

Like many pockets of urban America, the West Side took a turn for the worse. Desegregation resulted in the closure of black schools and black-owned businesses. Professionals migrated out of the area, leaving behind a neighborhood of “concentrated poverty.”

When Watts moved to Charleston in 1978, the environment was about to tumble further down the spiral.

“It was already bad when I got here, and then it got worse,” he recalled. “The rate of decline and disintegration escalated in the 1980s when crack cocaine hit hard and heavy. The violence associated with that pushed it into further decline. Then we reached a point of hopelessness and despair, as if nothing could be done. Many said it was a fire that had to burn itself out.”

More than four decades later, the West Side has not washed away its “wrong side of the tracks” reputation.

Today, the youth may be the hardest hit segment of the population. Consider these stats: 40 percent of West Side children are living in poverty, the highest rate of any Charleston neighborhood and above the state average.

Some community leaders believe they need better role models, or a way to figure out their true potential early in life.

“A little boy once came up to me and asked, ‘How much weed do you smoke a day?’” said the Rev. James Ealy, a Charleston city councilman who helps oversee a local community center with his wife. “I told him I don’t smoke it. He asked me again, and again I said ‘I don’t.’ He said he didn’t believe me because he thought all adults smoked weed.”

The Explorer carrying Watts and company continued circling around the boarded-up houses and vacant buildings throughout the community, occasionally stopping so everyone could step out, walk around, and observe.

“I remember coming here and playing as a kid,” said WVU Chief Diversity Officer David M. Fryson, pointing at one of the houses.

Fryson is no stranger to the area. He grew up in Institute, about ten miles west of Charleston, and graduated from Dunbar High School. After earning his law degree from the WVU College of Law in 1988, Fryson returned to the Kanawha Valley to work as an attorney in federal, state, and private-practice settings.

“Urban blight has been a long-standing issue here,” Fryson said. “But within my lifetime, there once was a different level of homeownership, and a different level of employment opportunities. You had Carbide, Dupont, and plenty of other blue-collar jobs available. Now we’re challenged because that entry level for the middle class has shrunk, and it’s not just the West Side.”

But now that Fryson is in Morgantown (he was named chief diversity officer in September 2012), he hasn’t forgotten the plight of his former community.

Sometimes, the best partnerships for community outreach evolve organically. Fryson and Watts, who’s leading the charge in reinventing the West Side through his church and nonprofit groups like the HOPE Community Development Corporation, have known each other for years.

So when Fryson was appointed to his new position, Watts saw an opportune time to explore WVU’s resources and expertise through his longtime friend.

“I’ve known David Fryson for more than 20 years,” Watts said. “I’ve always had a great respect for him, his intellect, and his passion for helping people in this community. He knows the West Side intimately and its challenges. If anyone can help us through the maze at WVU, it’s David Fryson.

”He knows that there’s tremendous talent and potential in the population. He always articulated about this mosaic quilt of humanity and how tapping into all of that diverse talent would make all of us better.”

But Fryson and WVU can’t just walk in, wave a wand, and leave the West Side a magical paradise.

Right now, WVU’s role in revitalizing the West Side Right is unclear. University and neighborhood officials are brainstorming ideas.

But rest assured, Fryson is going to try.

Some possibilities include having Chancellor’s Scholars tutor children and involving the University’s urban design team in renovating buildings, Fryson added. Watts thinks the School of Public Health and the WVU Extension Service, specifically its Energy Express program, could also play effective roles in revitalizing the West Side. Energy Express is an eight-week summer reading and nutrition program for children living in West Virginia’s rural and low-income communities.

“As the state’s land-grant flagship university, they have a tremendous amount of intellectual horsepower,” Watts said. “Any assistance is welcome, and they can help us in this fight. It’s a real struggle and a tussle to create opportunities for these children in the neighborhood. This was once a thriving community that produced high-achieving people. It can be that thriving community again.”